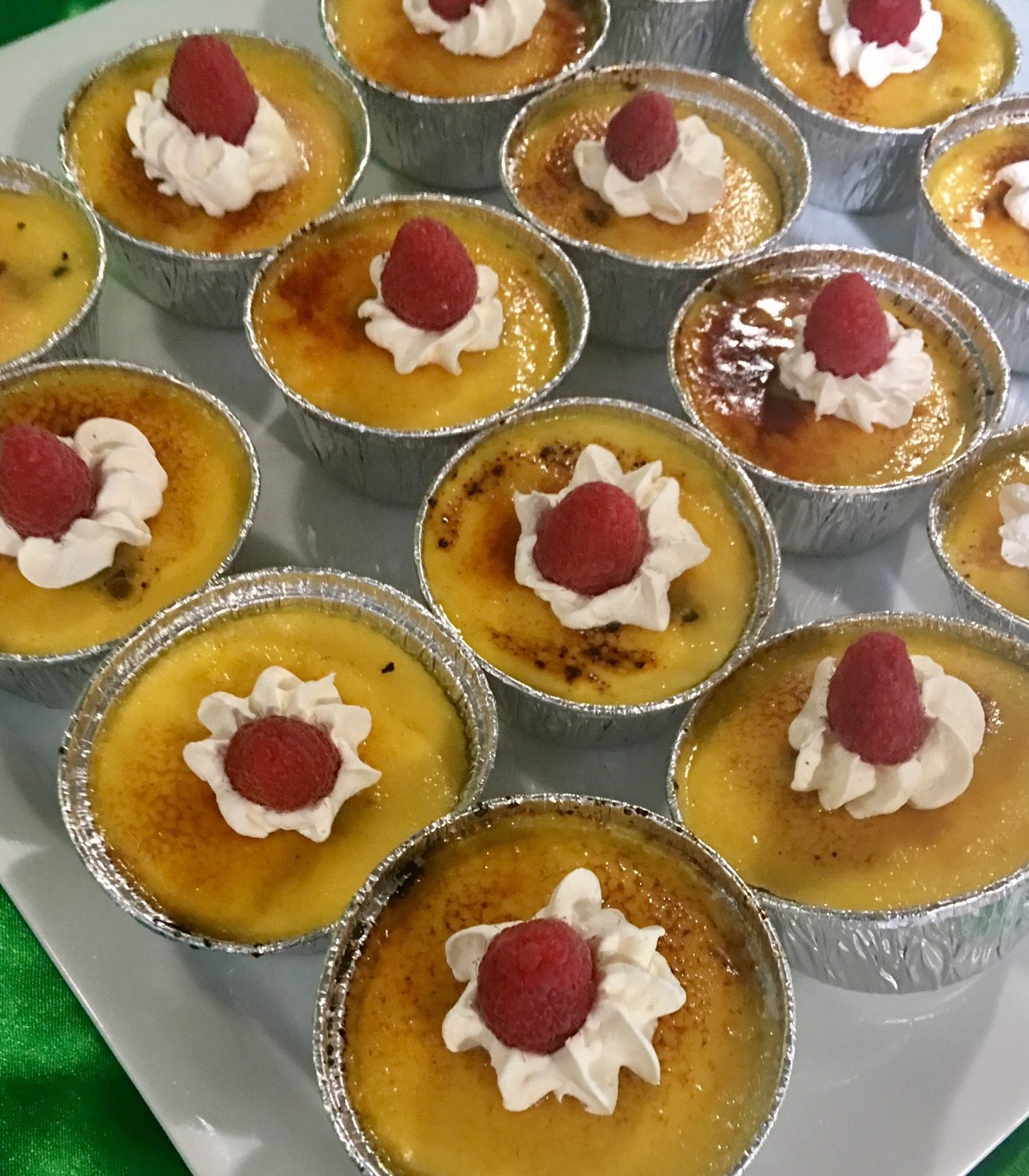 Who’s the next great American chef? Chances are it’s one of the uber-talented students from Birmingham’s Wenonah High School. On April 10th, students from the school’s Academy of Culinary Arts displayed their cooking skills to a crowd of educators, community leaders, family and friends as they competed in A Taste of Wind Creek’s “Ready. Set. Cook.” sponsored by Wind Creek Casino and Hotel and held at Innovation Depot. The winning prize? One thousand dollars donated to the school’s culinary arts program. The other winning prize? Well, that’s simple says the student’s culinary arts instructor Diann Pilgrim. “This event provides another opportunity for exposure for our students. It will show them that they can accept any challenge and succeed in it,” she said. And boy, did they succeed! 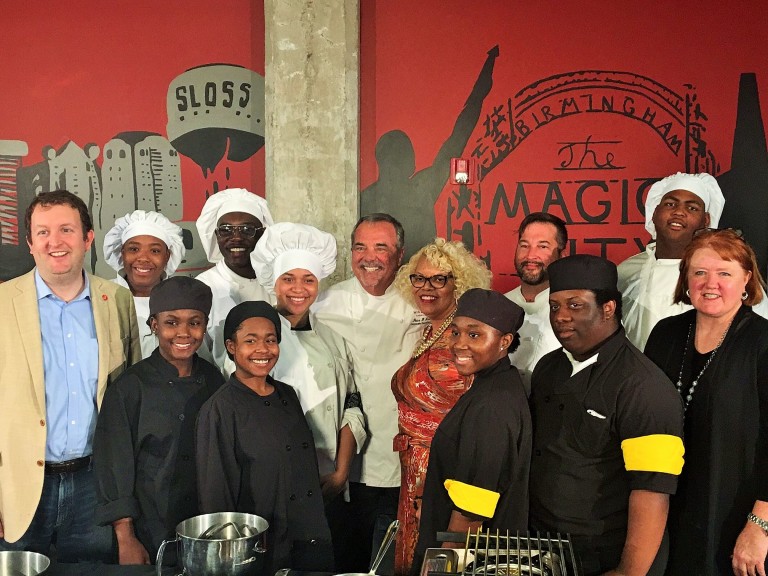 In a battle of the best, school seniors were pitted against juniors in a three-person team of chefs-in-training who raced the clock ala “Chopped” style to prepare a five-ingredient dessert which was a surprise to them just minutes before the one hour given to prepare the dish. There was sweat. There was panic. There were giggles. There was lots of prepping and even more taste-testing. In the end there were two amazing desserts which emerged from the teen food geniuses. Chef Brandon Thrash, culinary instructor at Wind Creek’s Atmore location coached the future chefs as needed while they prepared their dishes. He said this event was Wind Creek’s specific effort to focus on the educational component of culinary arts. “It’s important to give back to the state who gives us so much. We want these students to know they are capable of being successful in this industry starting now,” said Chef Brandon. 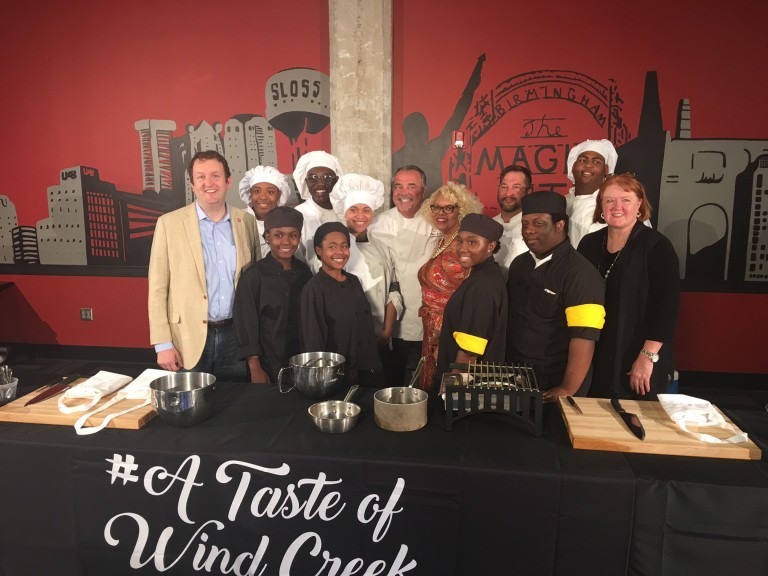 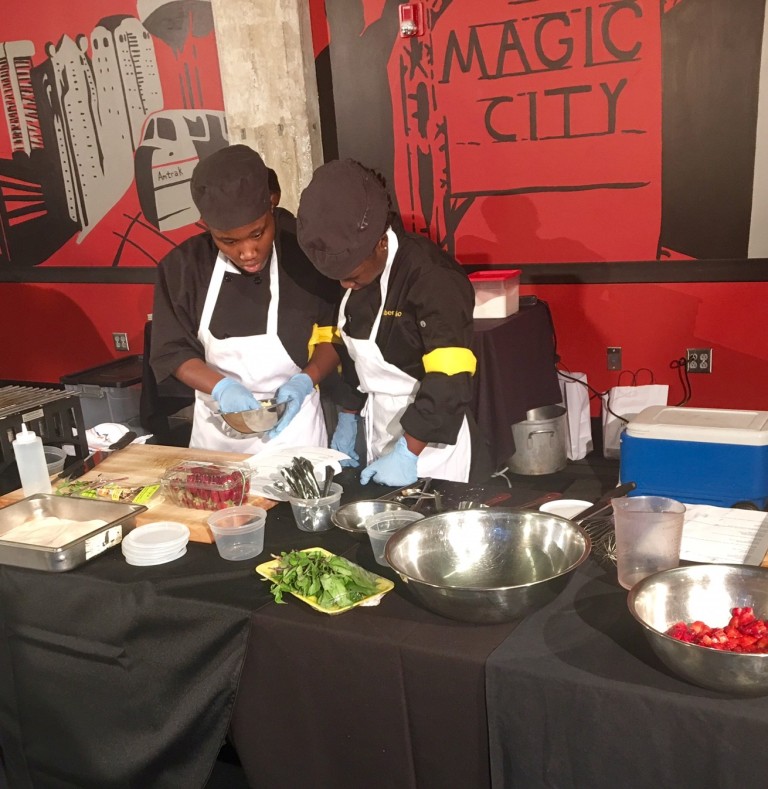 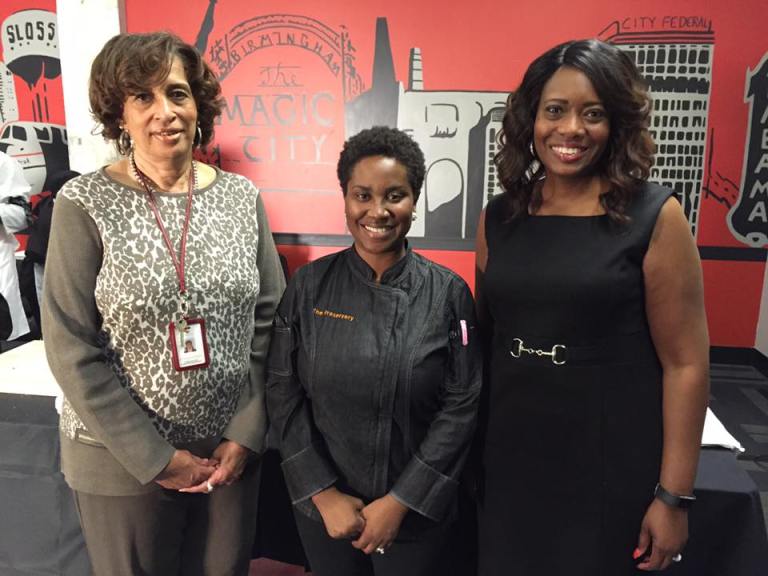 Somehow I was chosen to be a judge. I not only got to watch the action unfold up-close, but I was also able to be one of the first to taste the undeniably delicious finished products of Chocolate Mousse with Fried Banana and Caramel Syrup served up by the Grub Club, also known as the 11th Grade team, and the winning dish of Strawberry Mille Fuille with Basil Syrup from the 12th Grade team also known as 17 Flavors. The dishes prepared by the students could rival that of a seasoned expert any day. 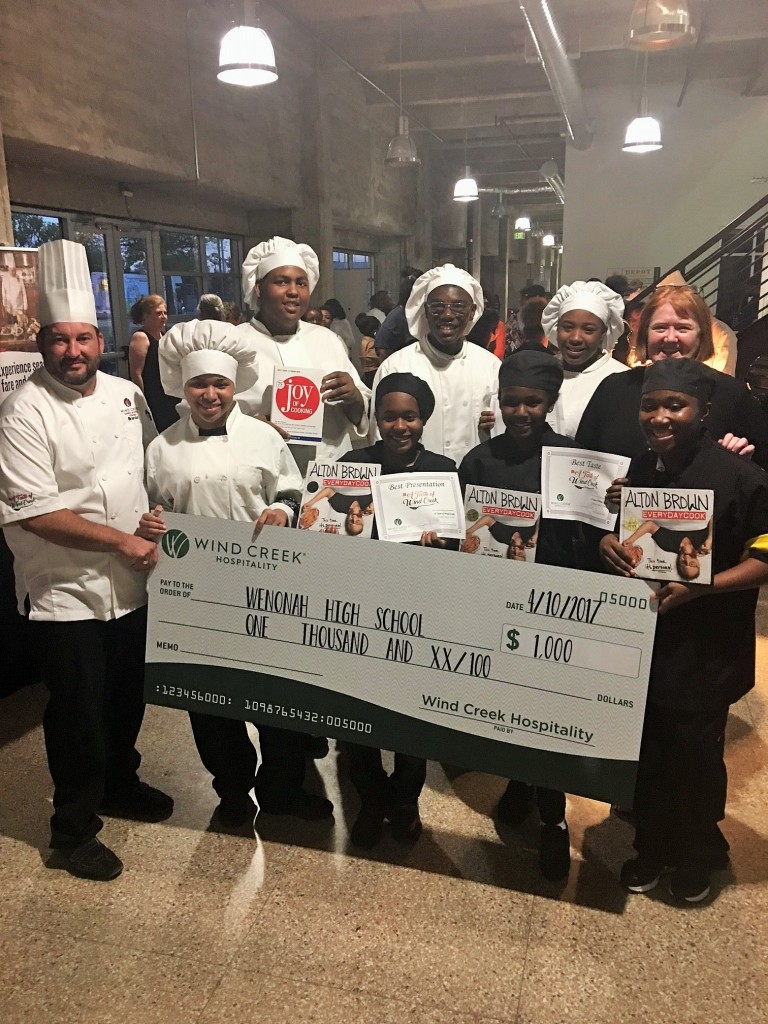 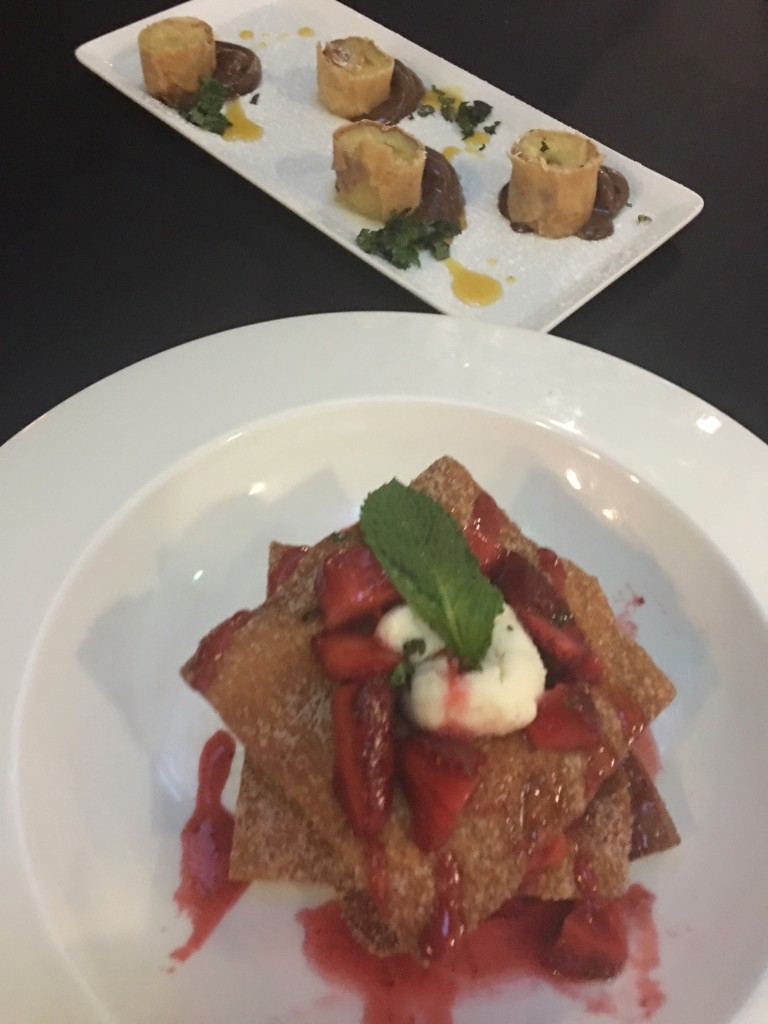 While students hurriedly prepared their dishes under the watchful eye of the glaring media lights and cameras, and onlookers gazing from the outside of the glassed kitchen, the hundreds of guests in attendance were treated to a treat, for lack of a better phrase, by the renowned chefs of Wind Creek Casino. A Taste of Wind Creek not only placed a spotlight on the up-and-coming chefs of tomorrow, it also allowed the culinary arts scene right here in Alabama and right at Wind Creek’s casinos to shine. Guests feasted on foods from four stations including fried green tomato and prawn stack with crab cakes and brandy cocktail sauce, a (super-succulent) beef tenderloin carving station where the chimichurri sauce settled perfectly on the tender loin which was perched atop a warm roll and topped with microgreens, vanilla crème brûlée crisped to perfection with a surprise raspberry bottom, and shrimp and grits with crawfish tasso gravy and sausage from the hotel’s upscale FIRE Steak House. I was in foodie heaven! FIRE and I will meet again for sure. 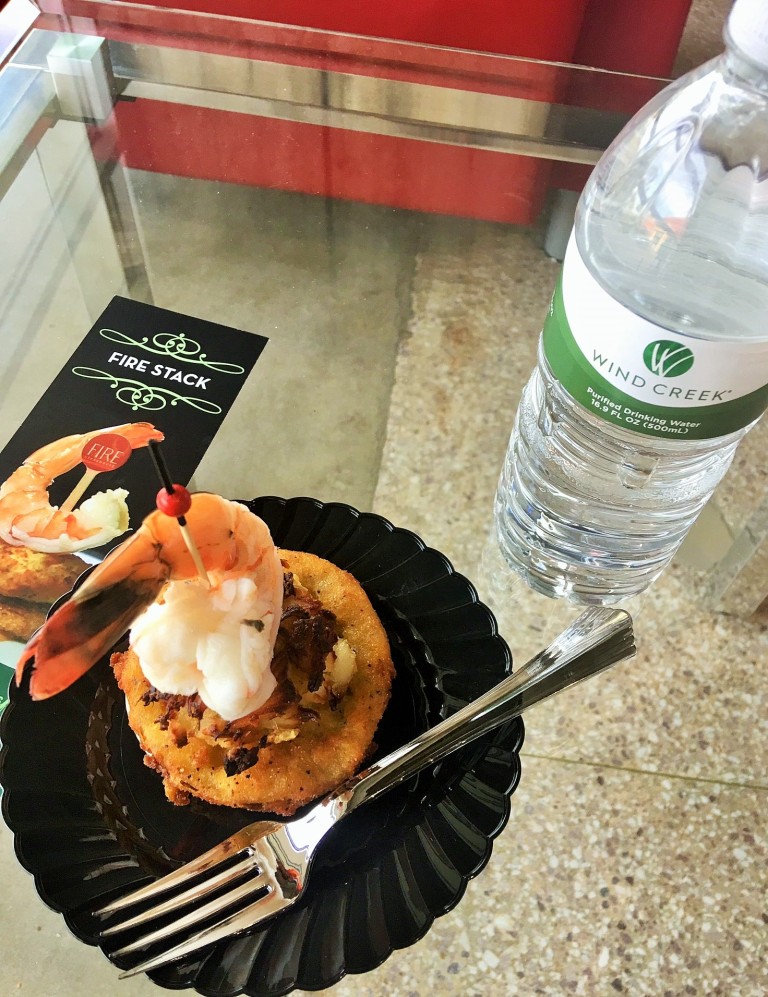 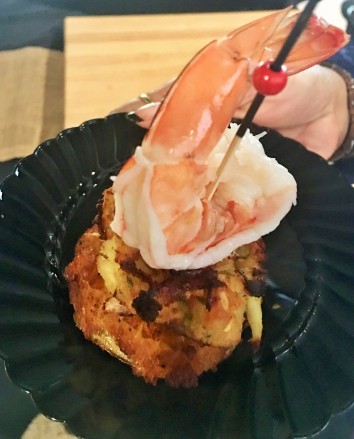 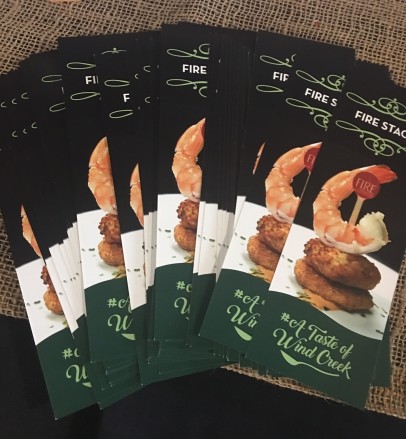 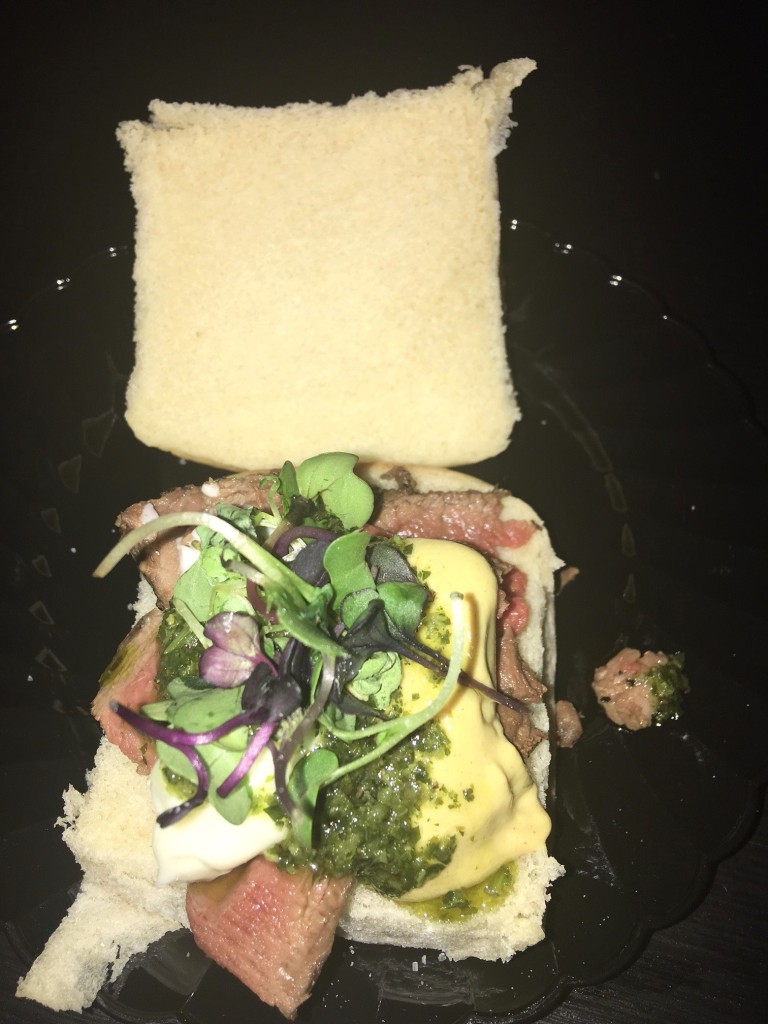 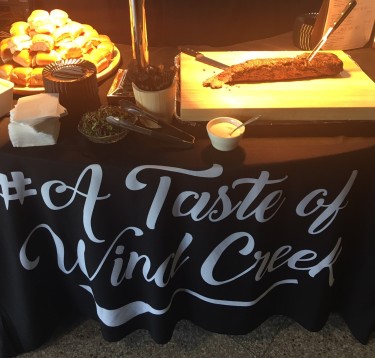 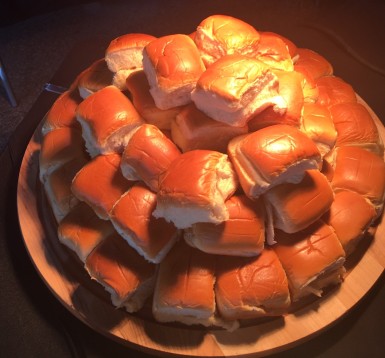 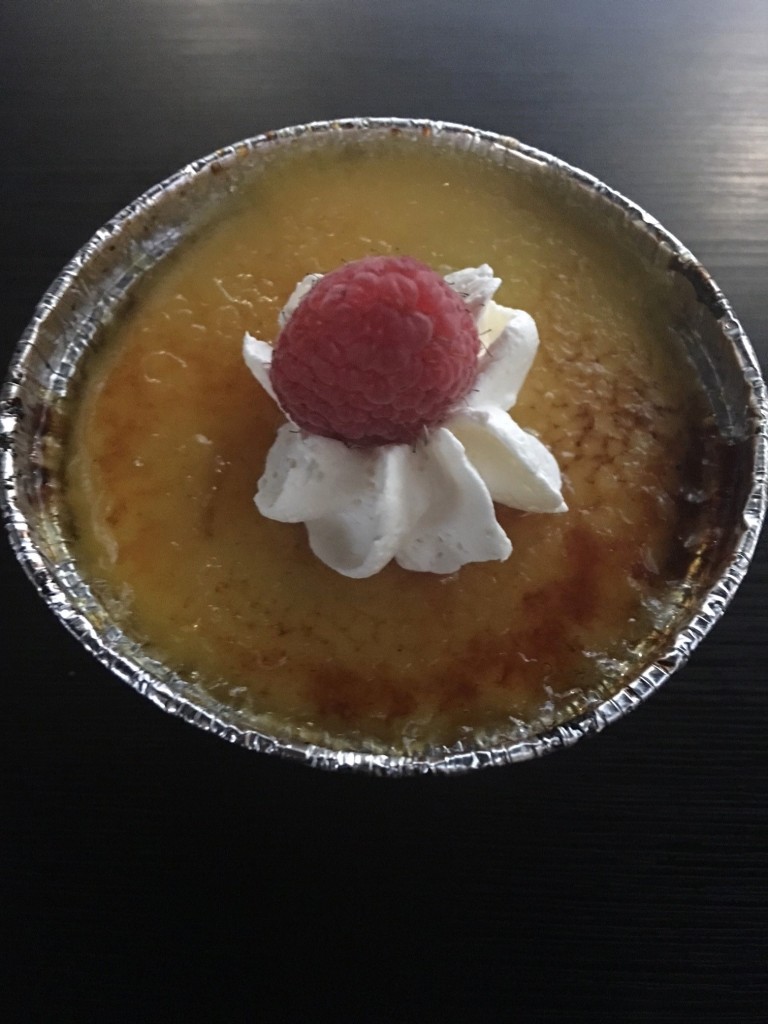 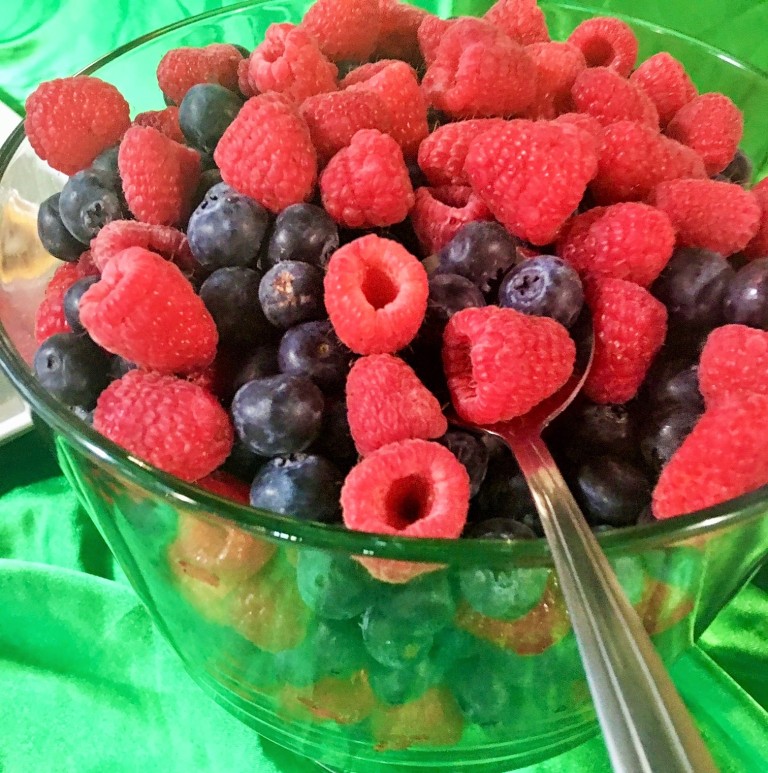 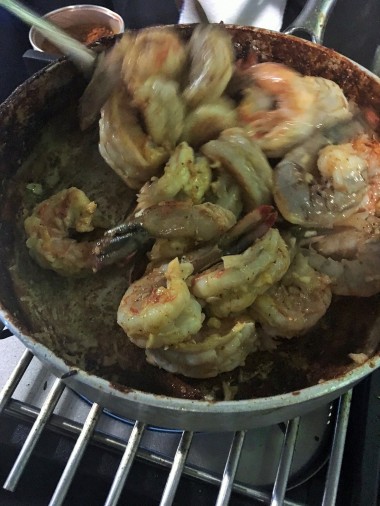 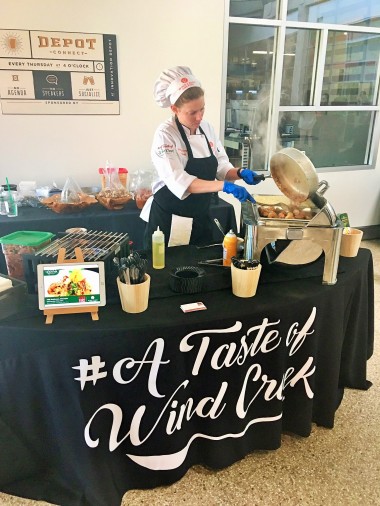 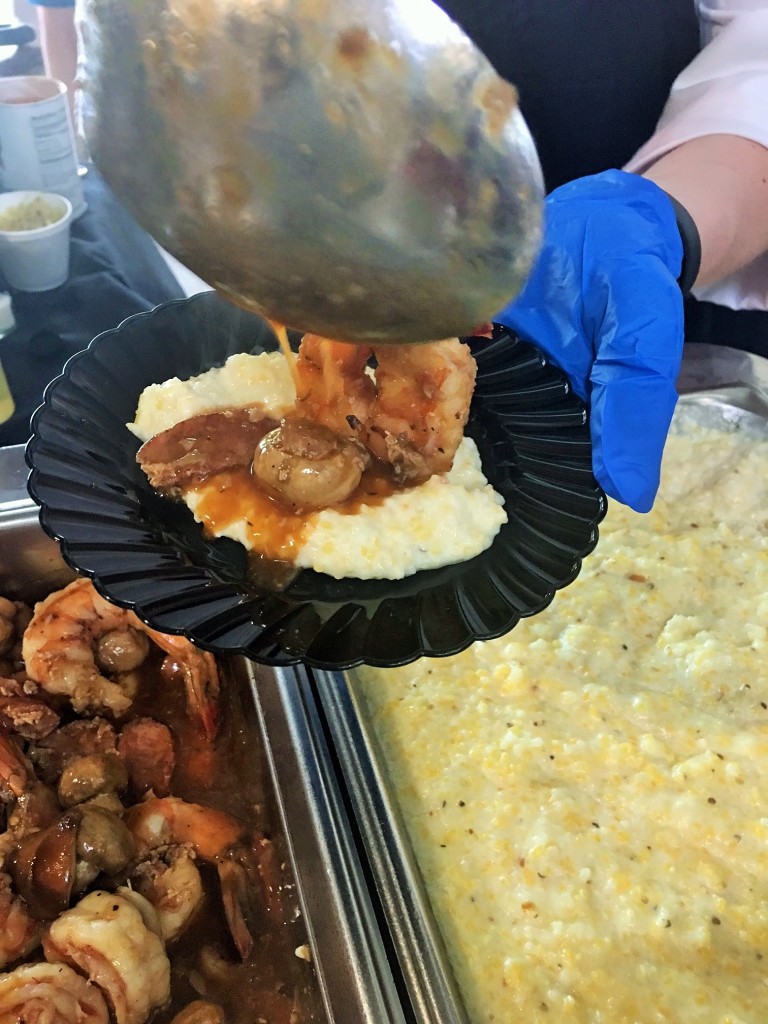 Wind Creek is traveling across Alabama to promote the importance of workforce development and how vital it is to reach people at a young age to help develop their skills. Through a partnership with Birmingham Ed Foundation, Birmingham City Schools and Wind Creek, the Wenonah High School students were fortunate to be included on the tour and empowered for the future. “Wind Creek wants to offer more training and skills to better the industry. Being here with these students is very important to us,” said Chef Peter D. Andrea. Next stop for the Taste of Wind Creek Tour is May 3rd in Huntsville with a summer menu coming soon. If you see me in Huntsville please save a seat and a shrimp for me.